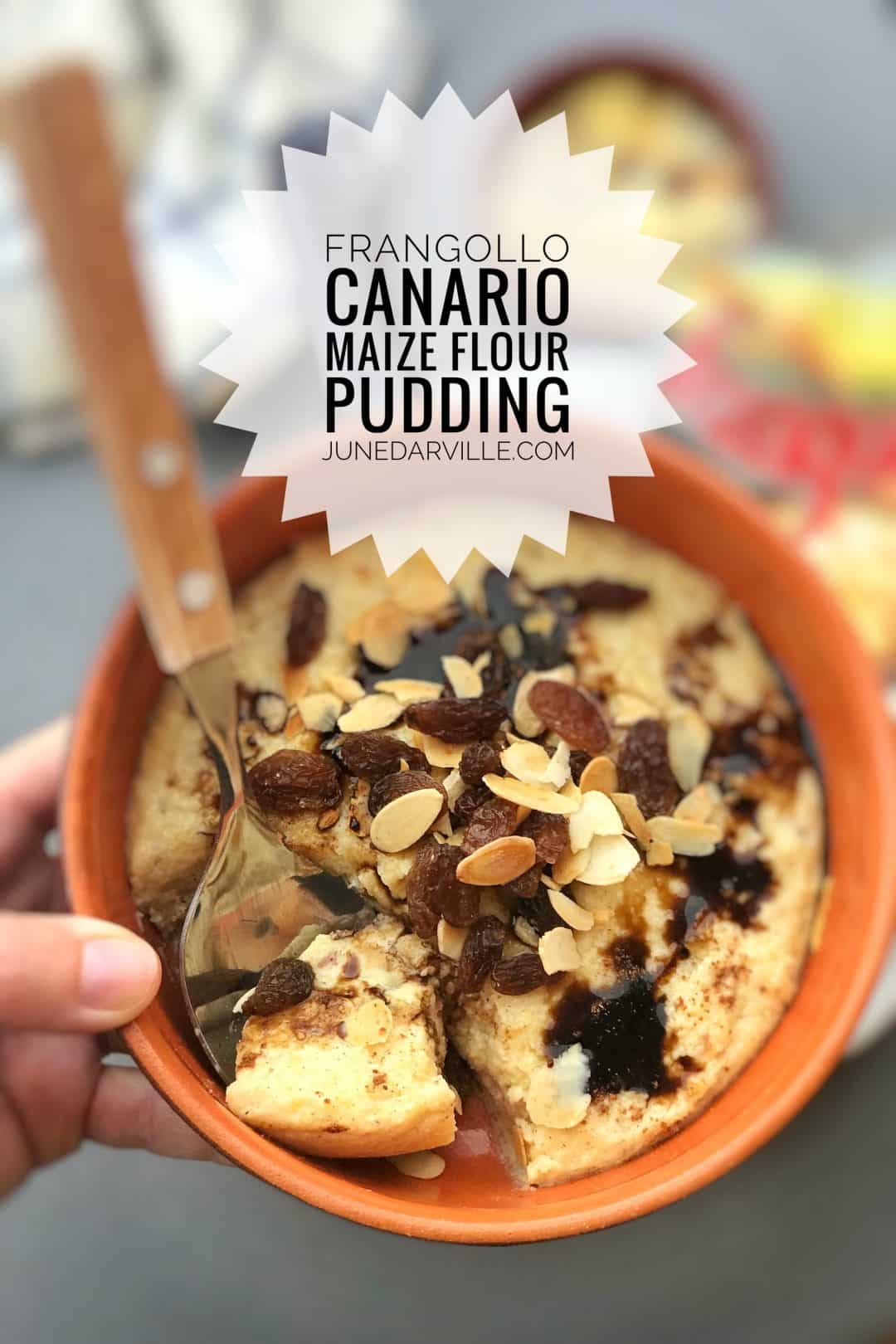 Have you ever heard of frangollo before? This is a sweet treat and a typical Canarian dessert of corn (maize) or millet flour, milk, butter, cinnamon, egg yolk, almonds, raisins and lemon rind.

Its taste and texture reminds me of the sweet and silky semolina pudding my mom used to make when I was little.

You can find this treat pretty often on a ‘menu del dia’ or lunch menu when you visit the Canary Islands. I haven’t seen it that often in Tenerife however but more in Gran Canaria.

And I love it to bits because it reminds me of my childhood. So then when I came across this small bag of frangollo millet flour in my local Mercadona supermarket I just wanted to recreate that lovely Canarian dessert myself at home.

And it turned out just fine, like I remembered it. I did give it my own little personal touch and topped the frangollo with some toasted shaved almonds and raisins. 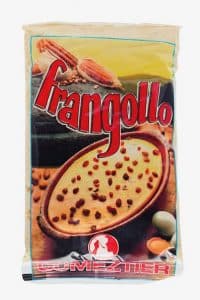 I sometimes also make a quick 5 minute caramel sauce that consists of melted brown, sugar, milk, water and butter. Just combine these ingredients in small saucepan, place it over medium-low heat until the butter and brown sugar have dissolved.

Then turn the heat lower and let the brown sugar sauce simmer until you end up with a smooth and sweet sauce. That brown sugar flavor goes extremely well with the almonds in the frangollo pudding by the way.

Do you love Canarian recipes?

Then also check out these classics: rabbit in salmorejo sauce, watercress soup and homemade mojo! And what about papas arrugadas or wrinkly potatoes? 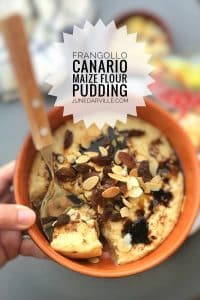 Frangollo, a typical Canarian dessert that contains millet flour, almonds, lemon zest and raisins! You will love this one... 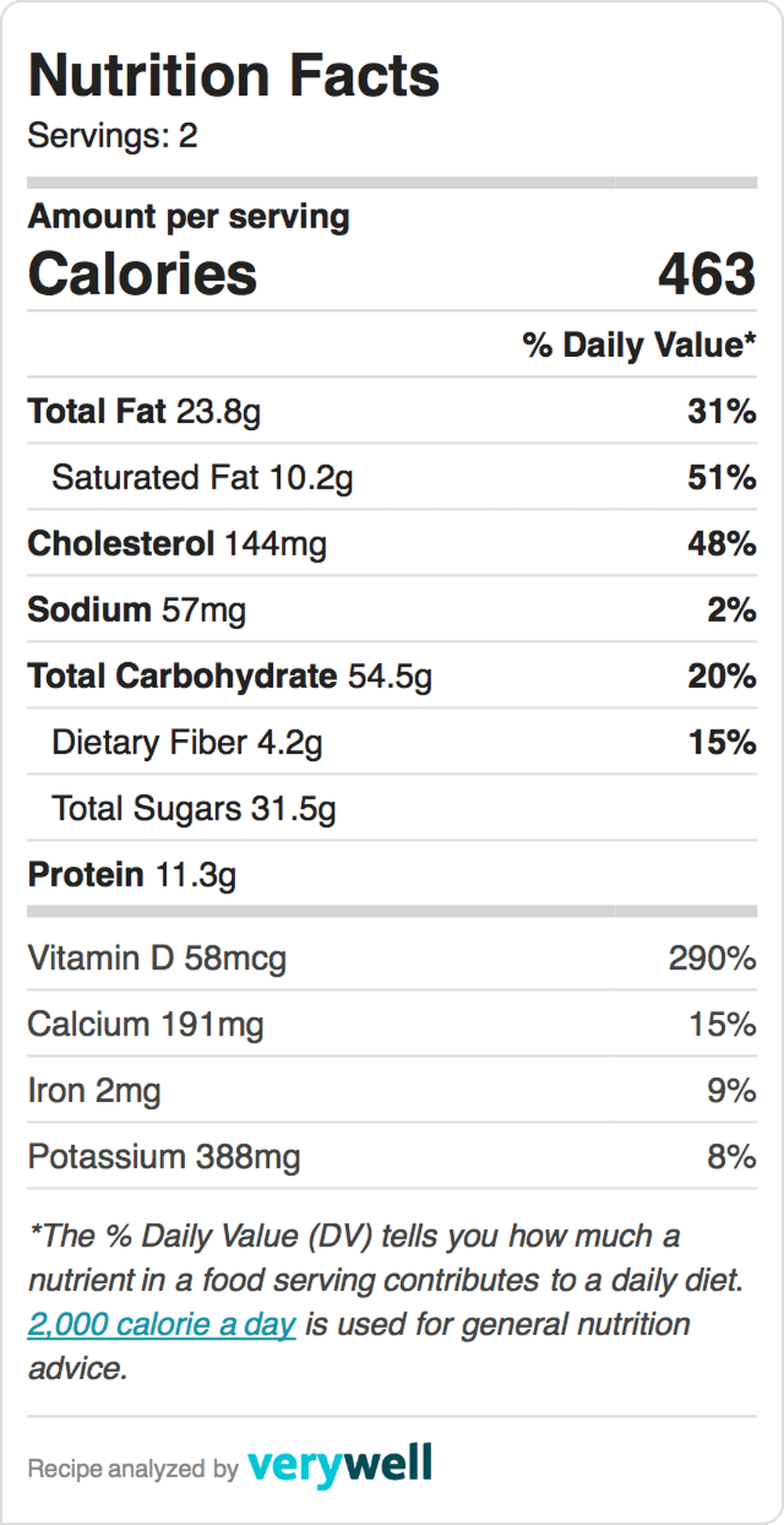 Do you know other Canarian desserts?

Maybe you’ve heard of bienmesabe, a thick sugary mixture of almonds and honey ? A few weeks ago we visited another Canarian island called La Palma. There we ate Principe Alberto pretty much every evening which is a lush chocolate and almond mousse.

Truchas canarias are also a popular treat, especially around Christmas: they are stuffed pastry pockets with lovely sweet threaded pumpkin jam in it (cabello de ángel). You might also find versions of this treat with sweet potato in it sometimes but I’ve never tried those before.

And do you know Rosquetes: fried pastry rings that are usually sprinkled with lots of icing sugar.

But one of my absolute favorite Canarian desserts is mousse de gofio.

That’s a creamy mixture that contains whipped cream, eggs, sugar, almonds, cinnamon and gofio. Now gofio is a type of wheat from Tenerife. I love to make escaldón de gofio, a side dish that consists of gofio wheat flour and fish stock.

You can find small instant gofio mousse bags in supermarkets here to which you only have to add  milk. There’s this ice cream parlour in Adeje, Tenerife where you can also order gofio ice cream with honey, absolutely delicious!

What is millet flour?

And it’s also rich in fiber, iron, calcium, and B vitamins. Millet grains are small in size and round. They are just a tad bigger than quinoa. In fact while I am doing some research about millet, I just realised that my mom actually used to prepare millet when we were little.

We would call it ‘gierst’ in Flemish. And yes, I did like it back then. If I’m not mistaken, we would eat cooked millet long before we knew what quinoa was.

The millet that my mom used to cook was yellow. But millet can also be paler in color, and even red. It allegedly contains more nutrients than rice and wheat.

Millet it a very old grain.

It originally comes from Africa and Asia where people have been cultivating and harvesting it for centuries. It even goes as far as prehistoric times. Ancient civilizations grew it. Nowadays you find millet in Africa, Asia, India and Eastern countries as a food grain and cereal crop.

The millet flour that I use for this dessert however is one that contains a coarser maize flour. It’s not the pure white cornflour you might have in your pantry. I’d say it’s a mixture of the white extremely fine maize flour and coarser ground corn because it’s got these small yellow specs in it.

So could I use plain cornflour to make Canarian frangollo?

Yes you can. Because if you ask me, the lightly grainy texture that the frangollo has, is mainly thanks to the ground almonds. And not the typical frangollo maize flour.

I’m sure you will love it…